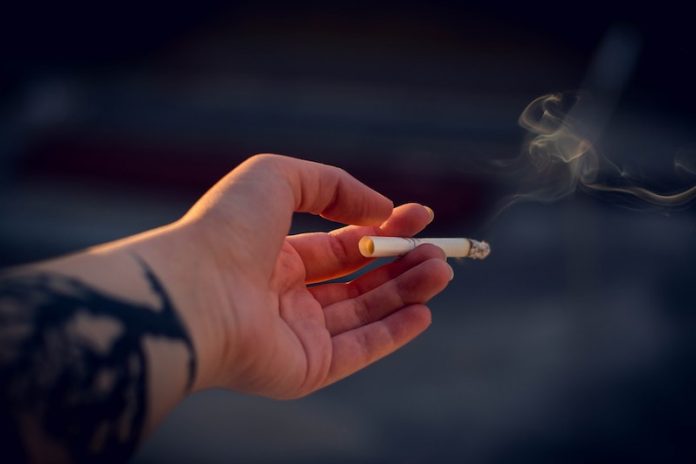 Cigarette smoking, practiced by over a billion people worldwide, is considered a leading cause of disease, accounting for over six million deaths each year.

Many people don’t quit smoking, despite expressing a desire to do so, because they are concerned about the substantial weight gain that often accompanies smoking cessation.

The cause of this weight gain is unclear, as studies suggest that most people don’t eat more after quitting smoking.

In a new study from Weizmann Institute of Science, researchers found that obesity developing after “smoking cessation” may be driven by the weight-modulating compounds released by their gut microbes.

The compounds they discovered may lead to new treatments that will help people avoid weight gain when quitting smoking. Moreover, these compounds may be further developed into therapies to fight obesity even among nonsmokers.

In the study, the team found that mice that were regularly exposed to cigarette smoke failed to gain weight, despite consuming a diet high in fat and sugar.

When the smoke exposure stopped, the mice rapidly gained weight, as often happens to humans who quit smoking.

But when the mice were given broad-spectrum antibiotics that depleted their microbiome, they gained much less weight after undergoing “smoking cessation”, staying slim for months regardless of their diet.

The team found smoking-related compounds such as nicotine penetrated the gut of “smoking” mice from the bloodstream, thereby altering the gut’s bacterial composition and, consequently, the body’s metabolism.

Then the researchers assessed the microbiomes of 96 smoking and nonsmoking people. They found marked alterations in the microbiome of smokers, as well as microbial metabolite changes that were similar to those found in the mouse “smokers,” including increased levels of DMG and its intermediate products.

Further studies will need to see whether these or other metabolites produced by the smoking-influenced microbiome contribute to weight gain after smoking cessation in humans.

If you care about weight loss, please read studies about do you need Intermittent fasting to lose weight and findings of keto diet could help you lose weight, but also harm your liver health.

For more information about weight loss, please see recent studies about the diet that may boost gut health and weight loss, and results showing that these 10 small changes could help prevent weight gain.

The study is published in Nature. One author of the study is Prof. Eran Elinav.