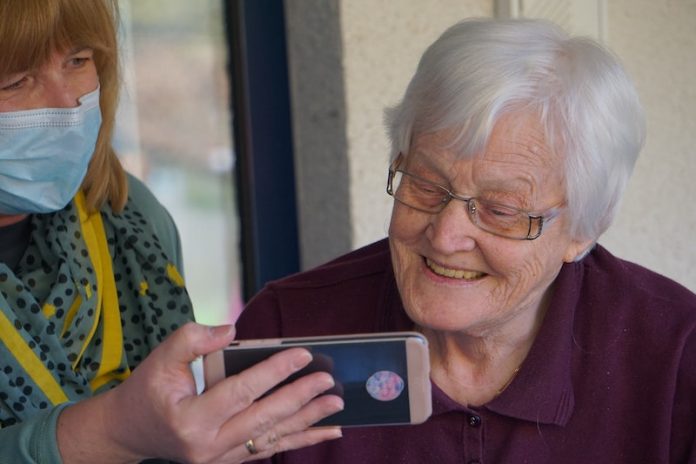 In a new study from ETH Zurich, researchers found that cognitive motor training improves both the cognitive and physical skills of strongly impaired dementia patients.

A fitness game known as Exergame was used in the study.

Dementia, including Alzheimer’s—the most common of several forms of dementia—remains incurable.

Previously, the team had found that older people who train both body and mind simultaneously demonstrate better cognitive performance and can thereby also prevent cognitive impairment.

In the study, the team developed the Senso training platform, which consists of a screen with the game software and a floor panel with four fields that measure steps, weight displacement and balance.

The users attempt to complete a sequence of movements with their feet as indicated on the screen, enabling them to train both physical movement and cognitive function simultaneously.

The fact that the fitness game is also fun makes it easier to motivate the subjects to practice regularly.

The study recruited 45 subjects for the study. The people were residents of two Belgian care homes, aged 85 years on average at the time of the study and all with severe dementia symptoms.

The participants were divided into two groups on a random basis. The first group trained for 15 minutes with the Senso platform three times a week for eight weeks, while the second group listened to and watched music videos of their choice.

Following, the physical, cognitive and mental capacity of all subjects was measured in comparison with the start of the study.

The team found that after the eight-week program, training with this machine enhanced cognitive skills, such as attention, concentration, memory and orientation.

It is particularly striking that the control group deteriorated further over the eight-week period, while significant improvements were recorded in the training group.

But playful training not only has a positive impact on cognitive ability—researchers were also able to measure positive effects on physical capability, such as reaction time.

After just eight weeks, the people in the training group reacted significantly more quickly, while the control group deteriorated.

The research team is currently working on replicating the results with people with mild cognitive impairment—a precursor of dementia.

If you care about dementia, please read studies about this kind of work could increase your dementia risk by more than 50% and findings of your body clock strongly linked to your risk of Alzheimer’s disease risk.