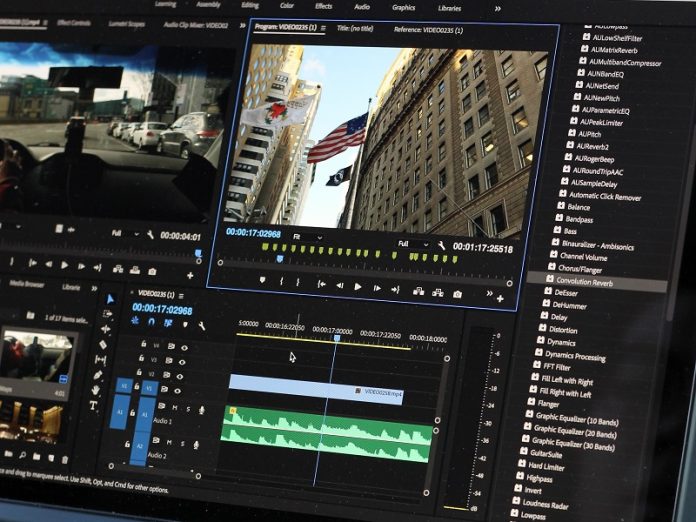 A new algorithm allows video editors to modify talking head videos as if they were editing text – copying, pasting, or adding and deleting words.

In television and film, actors often flub small bits of otherwise flawless performances. Other times they leave out a critical word.

For editors, the only solution so far is to accept the flaws or fix them with expensive reshoots.

Imagine, however, if that editor could modify video using a text transcript.

Much like word processing, the editor could easily add new words, delete unwanted ones, or completely rearrange the pieces by dragging and dropping them as needed to assemble a finished video that looks almost flawless to the untrained eye.

A team of researchers created such an algorithm for editing talking-head videos—videos showing speakers from the shoulders up.

The work could be a boon for video editors and producers but does raise concerns as people increasingly question the validity of images and videos online, the researchers say.

However, they propose some guidelines for using these tools that would alert viewers and performers that the video has been manipulated.

“Unfortunately, technologies like this will always attract bad actors,” says Ohad Fried, a postdoctoral scholar at Stanford University. “But the struggle is worth it given the many creative video editing and content creation applications this enables.”

The application uses the new transcript to extract speech motions from various video pieces and, using machine learning, convert those into a final video that appears natural to the viewer—lip-synched and all.

“Visually, it’s seamless. There’s no need to rerecord anything,” says Fried, who is first author of a paper about the research available on the pre-publication website arXiv.

It will also be in the journal ACM Transactions on Graphics.

Should an actor or performer flub a word or misspeak, the editor can simply edit the transcript and the application will assemble the right word from various words or portions of words spoken elsewhere in the video.

It’s the equivalent of rewriting with video, much like a writer retypes a misspelled or unfit word. The algorithm does require at least 40 minutes of original video as input, however, so it won’t yet work with just any video sequence.

As the transcript is edited, the algorithm selects segments from elsewhere in the recorded video with motion that can be stitched to produce the new material. In their raw form these video segments would have jarring jump cuts and other visual flaws.

To make the video appear more natural, the algorithm applies intelligent smoothing to the motion parameters and renders a 3D animated version of the desired result. However, that rendered face is still far from realistic.

As a final step, a machine learning technique called Neural Rendering converts the low-fidelity digital model into a photorealistic video in perfect lip-synch.

To test the capabilities of their system the researchers performed a series of complex edits including adding, removing, and changing words, as well as translations to different languages, and even created full sentences as if from whole cloth.

In a crowd-sourced study with 138 participants, the team’s edits were rated as “real” almost 60 percent of the time.

The visual quality is such that it is very close to the original, but Fried said there’s plenty of room for improvement.

“The implications for movie post-production are big,” says Ayush Tewari, a student at the Max Planck Institute for Informatics and the paper’s second author. It presents for the first time the possibility of fixing filmed dialogue without reshoots.

There are very valuable and justifiable reasons to want to edit video in this way, namely the expense and effort required to rerecord or repair such flaws in video content, or to customize existing audio-visual video content by audience.

Someone might use the algorithm to fine-tune instructional videos to different languages or cultural backgrounds, for instance, or adapt children’s stories to different ages.

“This technology is really about better storytelling,” Fried says.

Fried acknowledges concerns that such a technology might be used for illicit purposes, but says the risk is worth taking.

As a remedy, Fried says there are several options. One is to develop some sort of opt-in watermarking that would identify any content that had been edited and provide a full ledger of the edits.

Moreover, researchers could develop better forensics such as digital or non-digital fingerprinting techniques to determine whether a video had been manipulated for ulterior purposes. In fact, this research and others like it also build the essential insights that are needed to develop better manipulation detection.

None of the solutions can fix everything, so viewers must remain skeptical and cautious, Fried says.

Besides, he adds, there are already many other ways to manipulate video that are much easier to execute.

He says that perhaps the most pressing matter is to raise public awareness and education on video manipulation, so people are better equipped to question and assess the veracity of synthetic content.