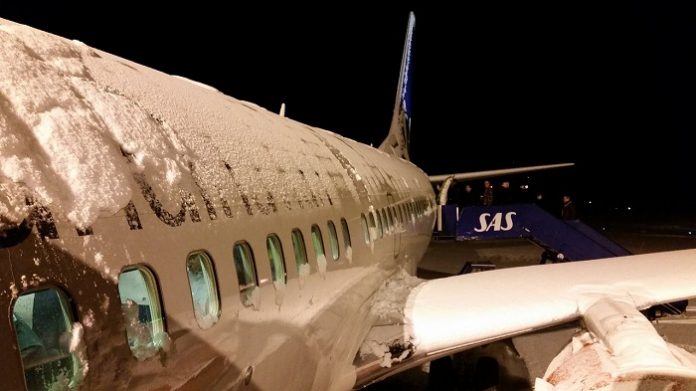 In a new study, scientists have found a new anti-icing method for the next generation of aircraft.

The study was conducted by researchers from Northwestern Polytechnical University in China and Iowa State University.

But at that height, the air temperature can be as low as -51 degrees Celsius and ice can easily form on wings.

Current methods use the heat generated by burning fuel to protect aircraft from ice, but they are hard to be used on next-generation aircraft, which is all-electric and made of temperature-sensitive materials.

In the current study, the team found that equipment for controlling landing and takeoff can double-up as icing control.

They focused on specific equipment called plasma actuators, which are a special type of short electrical circuit.

When a high voltage is applied across the two electrodes, plasma actuators can cause the particles of air above it to ionize and form a plasma and induce a flow.

This plasma flow over the actuator can control the aerodynamics of aircraft wings and change the lift and drag for landing and takeoff.

The researchers found that plasma actuators don’t just release an induced wind, they have both aerodynamic and heat effects.

Using this feature, they develop a completely new method for efficient icing and flow control.

Then high-speed cameras and infrared thermal imaging and particle scattering lasers were used to visualize how the induced flow and thermal output interacted.

The researchers conducted tests in still air conditions as well as inside an icing wind tunnel, where cold particles of air were fired at the airfoil.

They found that thermal and flow dynamics are inextricably interlinked for all three actuators.

Moreover, the plasma actuators placed perpendicular to the airfoil surface were the most effective at transferring heat along the wing, completely preventing ice formation.

The team suggests that the optimal design needs to generate as much heat locally while also mixing well with the incoming airflow.

They suggest their finding could be used to design an effective anti-icing system at low enough temperatures.

Future work needs to find out how thermal and flow effects are linked, and how exactly they work together to dissipate supercooled droplets from a wing’s surface.

One author of the study is Xuanshi Meng. The study is published in Physics of Fluids.