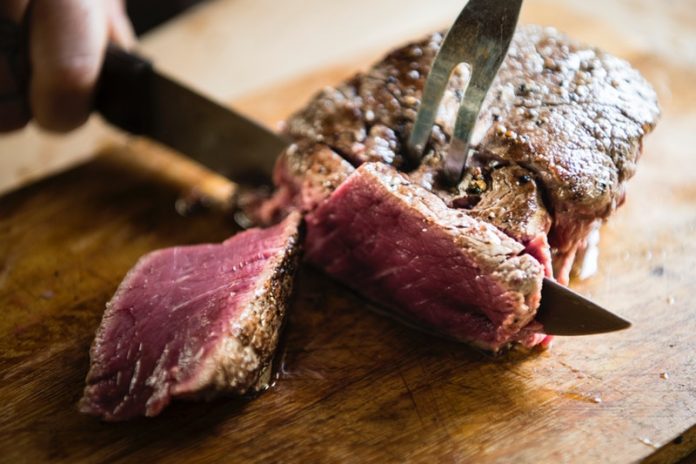 In a new study, researchers found that even moderately eating red meat and processed meat is still linked to a higher risk of bowel cancer.

The finding suggests the importance of a healthy diet in the prevention of bowel cancer.

The research was supported by Cancer Research U.K.

Bowel cancer, also known as colon cancer, is a cancer of the colon or rectum, located at the digestive tract’s lower end.

The main symptoms of bowel cancer may include blood in the stool, a change in bowel movements, weight loss, and feeling tired all the time.

Sedentary habits such as sitting for a long time, and an unhealthy diet high in saturated fat, red meat and processed meat, may contribute to colon cancer.

However, in the current study, the team found that people who eat red and processed meat within the department of health guidelines are still at increased risk of bowel cancer.

The team studied the diets of nearly half a million British men and women aged 40 to 69 over more than five years. A total of 2,609 people developed bowel cancer during the time.

The researchers found that people eating around 76g of red and processed meat a day still had a 20% higher risk of developing bowel cancer compared with people who only ate about 21g a day.

Moreover, the cancer risk rose 20% with every 25g of processed meat people ate per day, and 19% with every 50g of red meat.

It is one of the largest single studies in the field and one of the few to measure meat quantities and associated risks so precisely.

The team suggests that cancer risk increases at just eating 25g processed per day and that people should reduce the amount of such meat in their daily diet.

It is wise to get protein from other sources such as fresh chicken, fish, and plant-based sources.

One author of the study is Professor Tim Key, deputy director at the University of Oxford’s cancer epidemiology unit.