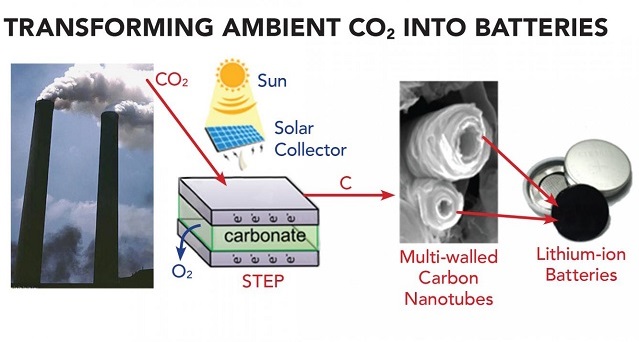 Now researchers from Vanderbilt University and George Washington University develop a new approach to convert CO2 into batteries for electric cars. The finding is published in ACS Central Science.

Researchers use the solar thermal electrochemical process (STEP) to convert CO2 into a useful carbon commodity (e.g., carbon nanofibers and carbon nanotubes). This technique uses inexpensive electrode materials and molten carbonate electrolytes.  It can function effectively with or without solar powered operation.

In the study, researchers use this process as a sustainable synthetic pathway to convert CO2 into carbon nanofibers and carbon nanotubes. These outputs can be used in lithium-ion and sodium-ion batteries for energy storage.

Researchers suggest a way to produce materials derived from CO2 that can have economic value in battery system: extracting CO2 from industrial smokestacks, such as conventional coal power plants.

Rather than processing large volumes to transform CO2 from air, the method can remove CO2 from plant emission, while providing hot CO2 for dissolution in the electrolysis. In addition, the electrolysis provides a pure oxygen product to improve power plant efficiency.

The electricity energy costs to convert CO2 into carbon nanofibers are relative low, requiring 0.9 to 1.4 V. Producing a metric tonne of carbon nanofibers for car batteries costs $800 to $1600. The revenue window for battery applications is high compared to traditional battery production.