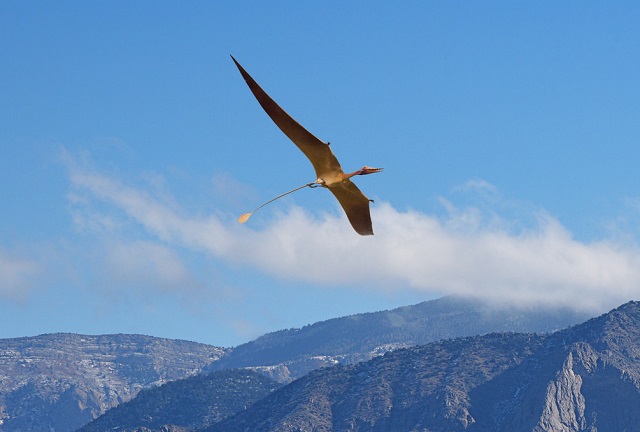 Scientists from Argentina, the UK, and Germany recently find a new species of pterosaurs from the Patagonia region of South America.

Pterosaurs are flying reptiles existing from the late Triassic to the end of the Cretaceous Period. Their wings were formed by a membrane of skin and muscle that could stretch from the ankles to a lengthened finger.

Pterosaurs have traditionally been divided into two major groups. One group had a long tail and a short neck, whereas the other group had a much larger body size range, a longer neck, and a shorter tail.

The new species discovered by scientists has a unique combination of characters from both groups. It belonged to a new species of pterosaur from the Early Jurassic.

Researchers found several bones of the species, including an almost perfect, three-dimensionally preserved braincase (the part of the skull that encloses the brain).

Researchers then did a virtual reconstruction of the braincase and examined the resulting 3D models.

The features of the frontal, parietal, temporal, and occipital parts of the braincase were compared with the brain of other pterosaur species.

The unique visual features of the brain anatomy in the new species showed that it could fill the large morphological gap between the two existing pterosaur groups.

Researchers suggest that this discovery can improve our understanding of the evolutionary origin and diversification of pterosaurs.

It also adds further evidence to support the hypothesis that the origin of dinosaurs, mammals, turtles, and crocodiles occurred before the Early/Middle Jurassic boundary.