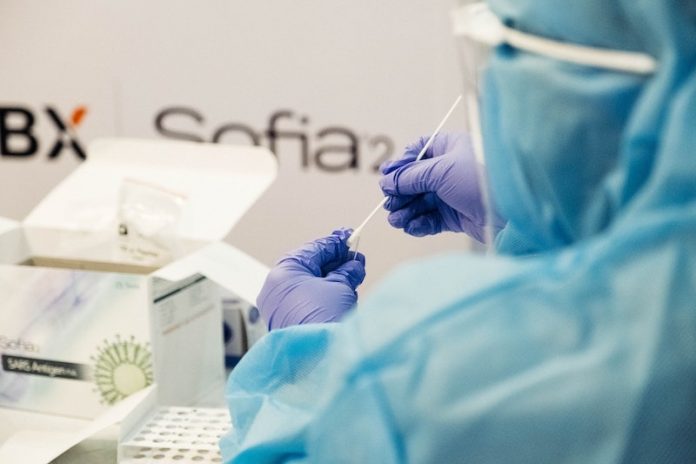 While the delta variant continues causing a surge of COVID-19 cases and hospitalizations in the United States, epidemiologists around the world are trying to learn as much as they can as quickly as they can about omicron, labeled a variant of concern by the World Health Organization Nov. 26.

Other variants of concern have come and gone—and this may be true of omicron as well.

But omicron is particularly worrisome because it has mutated more than 30 times and has been associated with an increase in cases in South Africa, where it was first detected (though it is believed to have originated elsewhere on the continent).

Omicron’s potential impact on the pandemic is yet unknown, but Johns Hopkins University experts say the COVID-19 mitigation strategies already in place around the world offer the best defense in the meantime.

“For the average person, it’s get your booster or get your vaccine—there’s nothing that they should really worry about right now,” says Johns Hopkins virologist Andrew Pekosz.

“The next two to three weeks are going to provide the data that really allow us to frame omicron in a better perspective with respect to potential risk.

In the next week, we’ll have data on how quickly this is spreading both in Southern Africa as well as in the places where travel-related cases have moved to, and I think that’s going to be the critical thing.

If we start to see lots of community spread in countries that have had imported cases, then that’ll give us a signal that this is something to really be concerned about.”

Beyond stressing the importance of vaccines and boosters, tracking what happens next should be our focus, along with getting more comfortable living alongside COVID-19, says David Dowdy, an associate professor of epidemiology at the Johns Hopkins.

It’s important to note that what we know about omicron today could change tomorrow, prompting further public health pivots as we close in on the two-year anniversary of the pandemic.

The Hub talked to Dowdy and Pekosz on Monday to find out what we know right now about omicron.

Why are the experts concerned about omicron?

On paper, Pekosz says that omicron has more mutations at important sites of virus protein function than any other COVID-19 variant we’ve seen so far.

And it has mutations that may make it faster to get in and establish that infection in human cells.” This combination of mutations plus data showing a spike in cases in southern African countries, where the variant first emerged, is worrying.

“I think either one of the pieces separately wouldn’t have been a big concern, but together that makes us want to get on our guard,” Pekosz says.

“And we know from public health interventions that time is of the essence. So the sooner we make an intervention, the more likely it is that that’s going to help us, if not stop at least delay a movement of a variant into the population.”

Has omicron been circulating for a while unnoticed?

“We know that viruses do not develop 30-plus mutations in one protein overnight,” Dowdy says. “And this variant is most genetically related to variants that came before delta.

So while delta has been more than 99% of all sequenced isolates in almost all areas of the world that have been doing sequencing for the past three or four months, this variant was somewhere.”

Any theories on how omicron evolved and will it keep mutating?

Dowdy says one leading theory is that omicron has been circulating undetected throughout Africa for a while now, but cases weren’t detected until they reached South Africa, which is a global model for genomic surveillance.

Another theory is that omicron could have evolved within one chronically infected person who was sick with COVID-19 for months, and many of the mutations occurred within that one person before spreading to others.

The good news is that vaccines offer hope against either scenario, even as cases start popping up outside of Africa, Dowdy says. “This is not a variant that’s seen a lot of the vaccine.

Whether this variant takes hold in the UK or Germany or Italy—and I’m sure we’re going to see cases in the U.S., too—is a much different question because these are places where there’s a lot of vaccine-induced immunity.”

Are vaccines going to protect us from omicron?

It will be two or three weeks before we know for sure, but even if existing vaccines aren’t a great match for omicron, it will provide at least some protection, Pekosz says.

“Importantly, it’ll probably protect against that severe disease, hospitalization, and death better than it protects against individual cases,” Pekosz says.

“And at the end of the day, that’s what we want to really have our eye on—limiting the severe disease cases that could potentially come from this.”

Dowdy is also optimistic that our vaccines will hold up against omicron. “It would be really surprising if this one random variant got super lucky and just happened to be able to evade our vaccine-induced immunity,” he says.

“There’s every reason to think that the vaccines are going to work against this variant.

The word variant is something that scares people, but this is not something that needs to be scary, especially if you’ve been vaccinated. It’s something for us to keep an eye on, but not to fear.”

Will we need another booster specifically to address omicron?

Vaccine manufacturers are already considering the possibility of an omicron-specific booster, which would take approximately 100 days to produce and distribute, Pekosz says.

“That’s amazingly fast for a vaccine. And I think this is where you could use influenza vaccines as a sort of a template.

With influenza vaccines, we update strains annually and the FDA doesn’t require vaccine manufacturers to go through everything they did for their initial approval.

They use that previously developed information on safety and efficacy, and then allow companies to just tweak their vaccine sequences and then make that new vaccine.

And I’m hopeful that that’s something that FDA will help facilitate if in fact, we do want to have a different strain in our boosters.”

Are variants going to be part of our life with COVID-19 going forward?

“We are going to continue to see variants pop up like this, so we as a society should get used to that,” Dowdy says.

“We have been going for five or six months now with strong pressure from vaccines and we have not seen another variant emerge despite high levels of transmission and a lot of cases.

But until now, we have not seen another variant out-competing delta.

That to me is a very encouraging sign because if the virus was still evolving rapidly, you would see these mutations accumulate and you would see new variants pop up one on top of the other, like we saw early in the pandemic.

So I think that the number of these variants that truly take hold is going to be smaller and smaller going forward. And when they do take hold, they’re probably only going to have a little bit of an advantage over delta as opposed to a big one.”

What can we do right now to protect ourselves?

Vaccination against COVID-19 remains the primary form of protection: People who haven’t been vaccinated should get vaccinated as soon as possible, and vaccinated adults should get booster shots, Pekosz says.

Is there anything positive to say about the situation with omicron?

Pekosz credits authorities in South Africa for quickly providing “fantastic data” that brought international attention to omicron. Their speedy action on identifying the new variant could save lives.

“Normally sequencing takes a day or two after you identify a case and you can say, yes, you’re infected with omicron.

They realized that one of their PCR tests gave a signal that is highly likely to be associated with infection with omicron.

And so they’re providing that data in a much faster way than we would expect it because this PCR test is allowing them to, in essence, jump in front of sequencing.

And so I give them all the credit in the world for getting this on people’s radar screens, because the sooner you can put in place measures to control the spread of this out of that region, the better off you’ll be.”

If you care about COVID, please read studies about what happens when the COVID-19 vaccines enter the body, and findings of antibodies from vaccination nearly 3 times higher than from COVID-19 infection.

For more information about COVID and your health, please see recent studies about scientists develop ‘warm vaccine’ to fight all COVID-19 variants and results showing that this drug can block multiple COVID-19 variants.