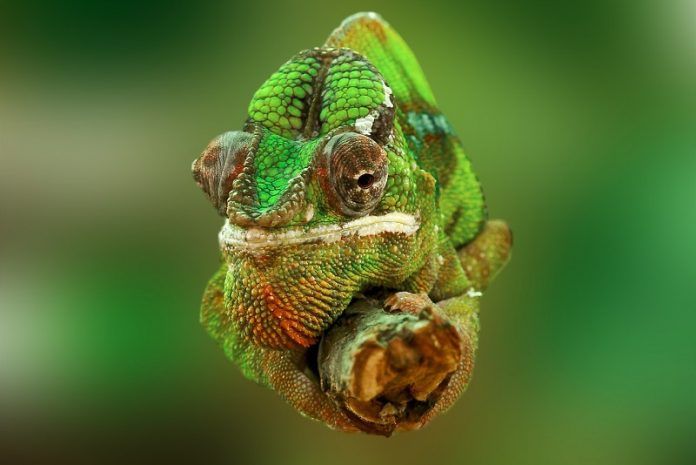 Researchers have developed artificial ‘chameleon skin’ that changes color when exposed to light and could be used in applications such as active camouflage and large-scale dynamic displays.

The material, developed by researchers from the University of Cambridge, is made of tiny particles of gold coated in a polymer shell, and then squeezed into microdroplets of water in oil.

When exposed to heat or light, the particles stick together, changing the color of the material. The results are reported in the journal Advanced Optical Materials.

In nature, animals such as chameleons and cuttlefish can change color thanks to chromatophores: skin cells with contractile fibers that move pigments around.

The pigments are spread out to show their color, or squeezed together to make the cell clear.

The artificial chromatophores developed by the Cambridge researchers are built on the same principle, but instead of contractile fibers, their color-changing abilities rely on light-powered nano-mechanisms, and the ‘cells’ are microscopic drops of water.

When the material is heated above 32C, the nanoparticles store large amounts of elastic energy in a fraction of a second, as the polymer coatings expel all the water and collapse.

This has the effect of forcing the nanoparticles to bind together into tight clusters. When the material is cooled, the polymers take on water and expand, and the gold nanoparticles are strongly and quickly pushed apart, like a spring.

“Loading the nanoparticles into the microdroplets allows us to control the shape and size of the clusters, giving us dramatic colour changes,” said Dr Andrew Salmon from Cambridge’s Cavendish Laboratory, the study’s co-first author.

However, the droplets of water also compress the particle clusters, causing them to shadow each other and make the clustered state nearly transparent.

At the moment, the material developed by the Cambridge researchers is in a single layer, so is only able to change to a single colour.

However, different nanoparticle materials and shapes could be used in extra layers to make a fully dynamic material, like real chameleon skin.

The researchers also observed that the artificial cells can ‘swim’ in simple ways, similar to the algae Volvox.

Shining a light on one edge of the droplets causes the surface to peel towards the light, pushing it forward. Under stronger illumination, high pressure bubbles briefly form to push the droplets along a surface.

“This work is a big advance in using nanoscale technology to do biomimicry,” said co-author Sean Cormier. “We’re now working to replicate this on roll-to-roll films so that we can make metres of colour changing sheets.

Using structured light we also plan to use the light-triggered swimming to ‘herd’ droplets. It will be really exciting to see what collective behaviours are generated.”