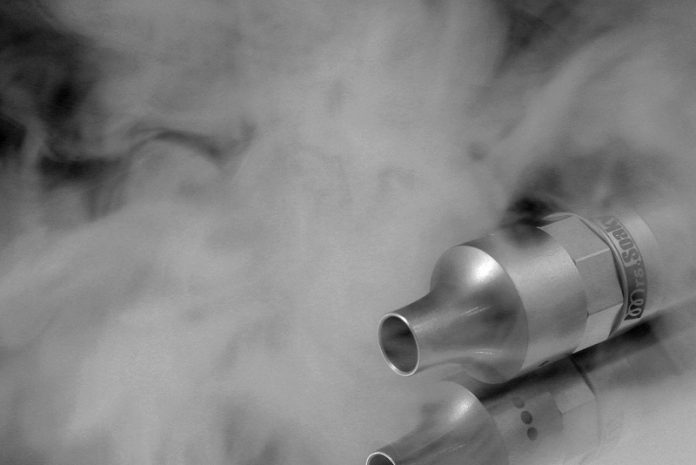 In a new study, researchers found that the liquid used in e-cigarettes, when heated, reacts to form irritating chemicals called acetals.

Inhaling flavor compounds at this level could be concerning, and acetals can irritate airways and lead to inflammation in the respiratory system.

An e-cigarette is a battery-powered nicotine delivery system.

Recent findings have shown it may be doing more to create nicotine dependencies for the approximately 10.8 million Americans (more than 3 million are middle or high school age) that vape.

The cartridge, filled with liquid containing nicotine and occasional flavorings, has an atomizer that heats the liquid, creating a vapor when the smoker inhales.

It can contain different levels of nicotine that people may not be aware of.

Pod mod devices are a type of e-cigarette with replaceable cartridges (i.e. pods) that are popular among teens given their small size, portability, and easy use.

Other attractive features include the fact that e-cigarettes don’t involve burning of tobacco like traditional cigarettes, so they don’t generate harmful combustion products like tar and carbon monoxide.

And when compared to traditional cigarettes, they also contain lower levels of carcinogenic compounds.

According to the team, e-cigarettes were first introduced to the United States in 2006.

It often takes many years, if not decades, for conditions such as cardiovascular disease, chronic lung disease and cancer to develop.

However, short-term usage can result in respiratory symptoms like chronic cough and mucus production.

E-cigarettes can also explode, which can cause a significant burn or even fracture injuries.

In addition, people who smoke e-cigarettes are more likely to start smoking traditional ones when compared to those who haven’t.

It is important to know that e-cigarettes are not approved by the FDA for smoking cessation. The role of e-cigarettes in helping to quit traditional cigarettes remains unclear.

They should be the first-line therapies for smoking cessation. In addition, they should ideally be used in conjunction with a tobacco cessation counseling program.

The researchers suggest more work is needed to check the long-term health impact of e-cigarettes on people’s health.

One author of the study is Wassim Walid Labaki, M.D., a pulmonologist at Michigan Medicine.

The study is published in American Journal of Preventive Medicine.