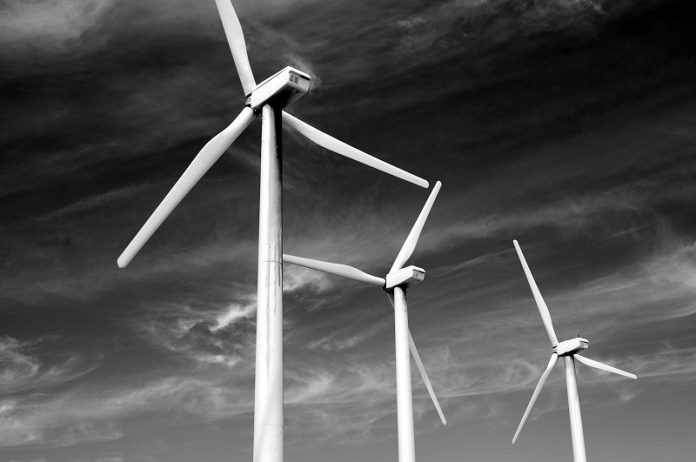 Angling turbines slightly away from the wind can boost energy produced overall and even out the otherwise variable supply, says Stanford study.

What’s good for one is not always best for all.

Solitary wind turbines produce the most power when pointing directly into the wind.

But when tightly packed lines of turbines face the wind on wind farms, wakes from upstream generators can interfere with those downstream.

Like a speedboat slowed by choppy water from a boat in front, the wake from a wind turbine reduces the output of those behind it.

Pointing turbines slightly away from oncoming wind – called wake-steering – can reduce that interference and improve both the quantity and quality of power from wind farms, and probably lower operating costs, a new Stanford study shows.

“To meet global targets for renewable energy generation, we need to find ways to generate a lot more energy from existing wind farms,” said John Dabiri, professor of civil and environmental engineering and of mechanical engineering and senior author of the paper.

“The traditional focus has been on the performance of individual turbines in a wind farm, but we need to instead start thinking about the farm as a whole, and not just as the sum of its parts.”

Turbine wakes can reduce the efficiency of downwind generators by more than 40 percent. Previously, researchers have used computer simulations to show that misaligning turbines from the prevailing winds could raise production of downstream turbines.

However, showing this on a real wind farm has been hindered by challenges in finding a wind farm willing to halt normal operations for an experiment and in calculating best angles for the turbine – until now.

First, the Stanford group developed a faster way to calculate the optimal misalignment angles for turbines, which they described in a study, published July 1 in Proceedings of the National Academy of Sciences.

Then, they tested their calculations on a wind farm in Alberta, Canada in collaboration with operator TransAlta Renewables.

The overall power output of the farm increased by up to 47 percent in low wind speeds – depending on the angle of the turbines – and by 7 to 13 percent in average wind speeds. Wake steering also reduced the ebbs and flows of power that are normally a challenge with wind power.

“Through wake steering, the front turbine produced less power as we expected,” said mechanical engineering PhD student Michael Howland, lead author on the study. “But we found that because of decreased wake effects, the downstream turbines generated significantly more power.”

One is the need for backup power supplies, like natural gas-fired power plants and large, expensive batteries.

In the new study, the power improvement at low wind speeds was particularly high because turbines typically stop spinning below a minimum speed, cutting production entirely and forcing grid managers to rely on backup power.

In slow winds, wake-steering reduced the amount of time that speeds dropped below this minimum, the researchers found. Notably, the biggest gains were at night, when wind energy is typically most valuable as a complement to solar power.

The other is the need to match exactly the amount of electricity supplied and used in a region every moment to keep the grid reliable.

Air turbulence from wakes can make wind farm production erratic minute by minute – a time period too short to fire up a gas generator. This makes matching supply and demand more challenging for system operators in the very short term.

They have tools to do so, but the tools can be expensive. In the study, wake steering reduced the very short-term variability of power production by up to 72 percent.

Although the experiment did not last long enough to prove that wake steering reduces turbine fatigue, the researchers suggested this would happen.

“The first question that a lot of operators ask us is how this will affect the long-term structural health of their turbines,” Dabiri said. “We’re working on pinpointing the exact effects, but so far we have seen that you can actually decrease mechanical fatigue through wake steering.”

To calculate the best angles of misalignment for this study, the researchers developed a new model based on historical data from the wind farm.

“Designing wind farms is typically a very data and computationally intensive task,” said Sanjiva Lele, a professor of aeronautics and astronautics, and of mechanical engineering.

“Instead, we established simplified mathematical representations that not only worked but also reduced the computational load by at least two orders of magnitude.”

“Our model is essentially plug-and-play because it can use the site-specific data on wind farm performance,” Howland said.

“Different farm locations will be able to use the model and continuously adjust their turbine angles based on wind conditions.”

Although the researchers were unable to measure a change in annual power production because of the limited 10-day duration of this field test, the next step, said Dabiri, is to run field tests for an entire year.

“If we can get to the point where we can deploy this strategy on a large-scale for long periods of time, we can potentially optimize aerodynamics, power production and even land-use for wind farms everywhere,” said Dabiri.