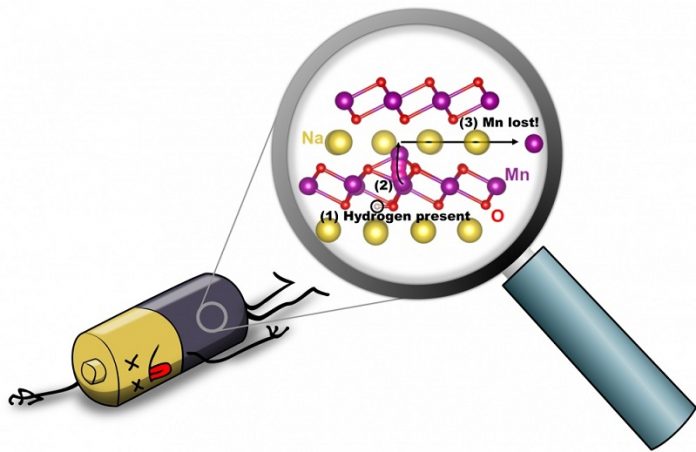 We rely on them to keep our cell phones and laptops buzzing and our hybrid and electric cars on the road.

But ever-increasing adoption of the most commonly used lithium-ion batteries may actually lead to increased cost and potential shortages of lithium — which is why sodium-ion batteries are being researched intensely as a possible replacement.

They perform well, and sodium, an alkali metal closely related to lithium, is cheap and abundant.

The challenge? Sodium-ion batteries have shorter lifetimes than their lithium-based siblings.

The unintended presence of hydrogen, which leads to degradation of the battery electrode.

Van de Walle and co-authors Zhen Zhu and Hartwin Peelaers published their findings in the journal Chemistry of Materials.

“Hydrogen is commonly present during the fabrication of the cathode material, or it can be incorporated from the environment or from the electrolyte,” said Zhu, who is now at Google.

“Hydrogen is known to strongly affect the properties of electronic materials, so we were curious about its effect on NaMnO2 (sodium manganese dioxide), a common cathode material for sodium-ion batteries.”

To study this, the researchers used computational techniques that are capable of predicting the structural and chemical effects that arise from the presence of impurities.

Professor Peelaers, now at the University of Kansas, described the key findings: “We quickly realized that hydrogen can very easily penetrate the material, and that its presence enables the manganese atoms to break loose from the manganese-oxide backbone that holds the material together.

This removal of manganese is irreversible and leads to a decrease in capacity and, ultimately, degradation of the battery.”

“Earlier research had shown that loss of manganese could take place at the interface with the electrolyte or could be associated with a phase transition, but it did not really identify a trigger,” Van de Walle said.

“Our new results show that the loss of manganese can occur anywhere in the material, if hydrogen is present. Because hydrogen atoms are so small and reactive, hydrogen is a common contaminant in materials.

Now that its detrimental impact has been flagged, measures can be taken during fabrication and encapsulation of the batteries to suppress incorporation of hydrogen, which should lead to better performance.”

In fact, the researchers suspect that even the ubiquitous lithium-ion batteries may suffer from the ill effects of unintended hydrogen incorporation.

Whether this causes fewer problems because fabrication methods are further advanced in this mature materials system, or because there is a fundamental reason for the lithium batteries to be more resistant to hydrogen is not clear at present, and will be an area of future research.