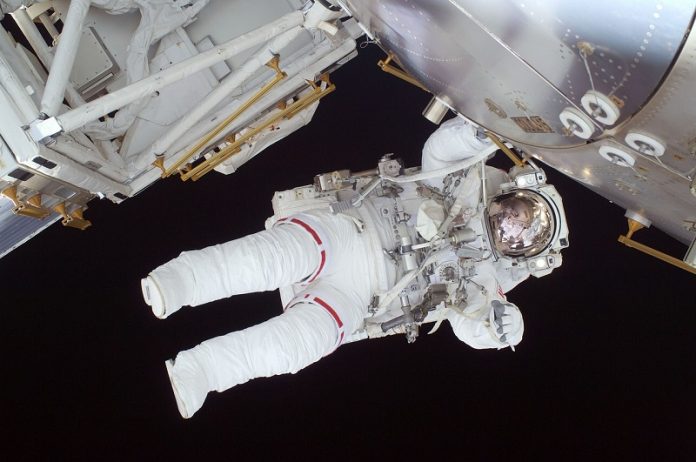 Up to two hours of endurance and resistance exercises daily during a long space flight mission, combined with IV fluid replacement after landing, helps astronauts prevent dizziness and fainting during normal activity when they return to Earth.

The study findings also have implications for a variety of people with health conditions that cause them to faint when standing up, and people on bed rest for long periods.

Nearly 50 years after man’s first steps on the moon, researchers have discovered a way that may help astronauts spending prolonged time in space come back to Earth on more stable footing, according to new research in the American Heart Association’s journal Circulation.

“One of the biggest problems since the inception of the manned space program has been that astronauts have fainted when they came down to Earth.

The longer the time spent in a gravity-free environment in space, the greater the risk appeared to be,” said Benjamin Levine, M.D.

“This problem has bedeviled the space program for a long time, but this condition is something ordinary people often experience as well.”

Orthostatic hypotension is the technical term for a temporary drop in blood pressure when a person stands up after sitting or lying down because blood rushes to the feet, away from the brain.

Dizziness or fainting due to changes in blood flow can occur after lengthy bed rest, among people with certain health disorders or, in the case of astronauts, being in a low-gravity environment.

All performed individualized endurance and resistance exercise training for up to two hours daily during space flight to prevent cardiovascular, bone and muscle deconditioning. They also received a saline infusion upon landing.

The astronauts’ blood pressure was recorded with every heartbeat over each 24-hour period before, during and after their time in space.

The researchers found that there was minimal impact on their blood pressure during all phases of measurement and none of the astronauts in the study experienced dizziness or fainting during routine activities 24 hours after landing.

This is the first study to demonstrate that astronauts do not experience dizziness or fainting during routine activity after landing, as long as they participate in certain types of exercise training while in flight and receive IV fluids when they return to earth, said Levine

“What surprised me the most was how well the astronauts did after spending six months in space.

I thought there would be frequent episodes of fainting when they returned to Earth, but they didn’t have any.

It’s compelling evidence of the effectiveness of the countermeasures—the exercise regimen and fluid replenishment,” he said.

The researchers note that the sample size was small. Also, they could not clearly distinguish whether specific in-flight blood pressure readings occurred while the astronauts were awake or asleep, so the data were combined and examined over 24-hour periods.

Since all the astronauts participated in the exercise regimen and received a saline fluid infusion upon landing, researchers do not know if the the blood pressure stabilization would have occurred without those measures.

Next, the researchers would like to study larger numbers of astronauts and those who spend longer than six months in space.

“Understanding the physiology of space flight can be helpful for understanding many conditions experienced by non-astronauts.

For example, the exercise program our lab developed for the space program is already helping people with a fainting condition known as postural orthostatic tachycardia syndrome (POTS),” Levine said.

“As we prepare to celebrate the 50th anniversary of the Apollo 11 moon landing, it’s exciting to think of how our exploration in and of space can lead to important medical advances here on Earth.”