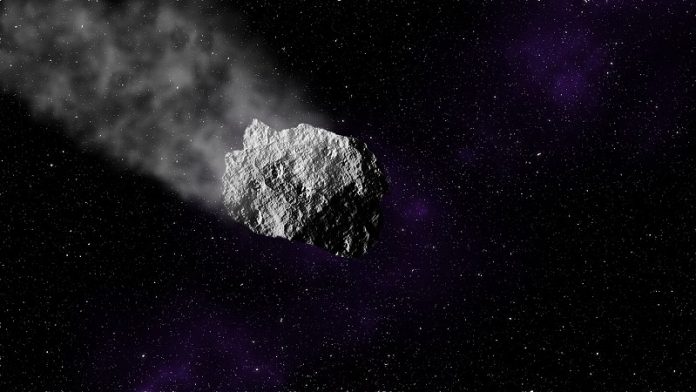 Picture this: A bacteria-carrying asteroid is ejected from the center of the galaxy into the far reaches of space only to be “captured” by a distant solar system, potentially bringing life to a new world.

It might sound like the stuff of pulp science fiction, but the evidence suggests it might happen far more often than scientists ever thought, according to Idan Ginsburg.

A postdoctoral scholar at the Institute for Theory and Computation, Ginsburg is the lead author of a study that makes the most comprehensive calculation ever of the likelihood of that process — known as “panspermia” — occurring in the Milky Way.

What they found, Ginsburg said, was surprising: Calculations showed there may be as many as 10 trillion asteroid-sized objects carrying life.

The work also suggested there may be as many as 100 million objects the size of Saturn’s moon Enceladus, which is about 500 kilometers in diameter, and as many as 1,000 Earth-sized objects also carrying life or prebiotic material.

“We are not the first to have discussed this, but we are the first to really look into this at such a level of detail,” Ginsburg said.

“Other researchers have mentioned the possibility of galactic panspermia, but when we did the calculations we got these very large values. That suggests that this is not only possible, it’s probable.”

And while it may seem unlikely that life — even the tiniest bacteria — could survive in the harsh conditions of deep space, Ginsburg said studies have repeatedly shown the opposite.

“The biggest worry people had for a long time with this idea was that UV radiation would just destroy life,” he said. “But it turns out if you’re shielded, even just a few inches, by rock or ice, that’s enough protection.

There are even more complex life forms, like tardigrades, that can survive in space — they simply go into hibernation.

So we know that microbes on a planet can survive being ejected into space; they can survive in space and, in theory, survive re-entry to be transplanted from one planet to another.”

To understand how the process might occur, Ginsburg, Lingam, and Loeb began by looking at the center of the galaxy.

“Our solar system is fairly stable, but there are other places — especially in the center of the galaxy — where things are much more dynamic, and objects can be and do get kicked out all the time,” Ginsburg said.

That process, Ginsburg said, is driven by the gravity slingshot effect produced by the super-massive black hole at the center of the galaxy.

“With a black hole you can easily accelerate things to anywhere from 1,000 to over 10,000 kilometers-per-second,” he said.

“That’s fast enough to travel across the galaxy, but there is still a chance for an object like that to be captured by a solar system closer to the edge of the galaxy, so it’s possible to transfer life across vast distances in a relatively short time.”

Calculating the chances of that happening, Ginsburg said, was no easy feat.

“We took into account the number of stars an object would pass through, its velocity, how long life can survive, the size of the object,” he said.

“This is a seven-dimensional integral — I don’t think you could consider any more variables without getting into something like string theory. This is not just a thought experiment, it was incredibly mathematically detailed — we took the mathematics, the physics, and the biology together and put together a clear picture of how this might work.”

Going forward, Ginsburg, Lingam, and Loeb said there are a number of avenues to pursue, but a key question is whether scientists might one day be able to observe the process in action.

“That will be difficult, but I tell people that just a few decades ago, scientists thought it would be very challenging if not impossible to find exoplanets or gravity waves,” Ginsburg said.

“We think that, hopefully, people will eventually be able to search for signs of this, and that by studying our own galaxy, it can help us understand the origins of life.”