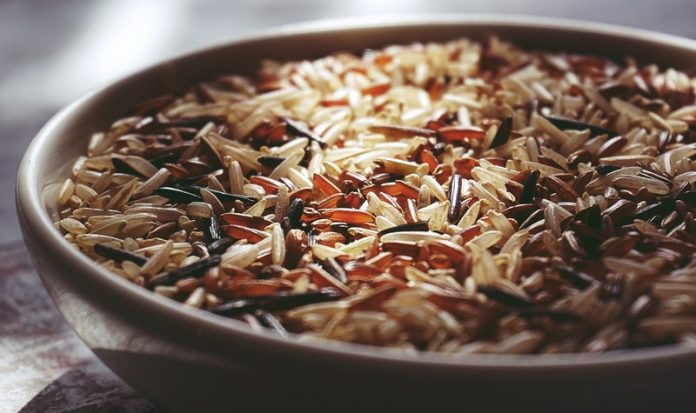 In a new study, researchers found that eating rice may help protect against obesity.

The research was conducted by an international team led by Japanese researchers.

Previous research has shown that people who eat more dietary fiber and whole grains have lower body weight and cholesterol.

These people also have lower rates of chronic diseases compared with people with lower intakes of rice.

However, how rice consumption influences obesity is unclear.

in the study, the team examined data for more than 136 countries.

They examined rice (white rice, brown rice, and rice flour) intake and energy consumption in the diets of more than 1 million. The data were from the UN Food and Agriculture Organization.

The researchers found an inverse association between rice consumption and rates of obesity: Countries that eat higher amounts of rice have lower obesity rates, while countries with lower average rice intake have higher obesity levels.

They explain that the fiber, nutrients, and plant compounds found in whole grains may increase feelings of fullness and prevent overeating.

Rice is also low in fat and has a relatively low postprandial blood glucose level which suppresses insulin secretion.

They also mention that overeating some types of rice may increase the risks of metabolic syndrome and diabetes.

The results showed that the people who ate at least 5 weekly servings of white rice had a 17% higher risk than those who ate less than 1 serving per month.

On the other hand, people who ate at least 2 servings of brown rice a week had an 11% lower risk of type 2 diabetes than those who ate less than 1 serving a month.

The researchers suggest that eating an appropriate amount and type of rice may bring health benefits.

Even a modest increase in average rice consumption (of 50g/day/per person) may help reduce obesity by 1% in the world.

They suggest that eating more rice should be recommended to protect against obesity even in western countries.

The leader of the study is Professor Tomoko Imai from Doshisha Women’s College of Liberal Arts, Kyoto, Japan.

The study was presented at this year’s European Congress on Obesity (ECO) in Glasgow, UK.