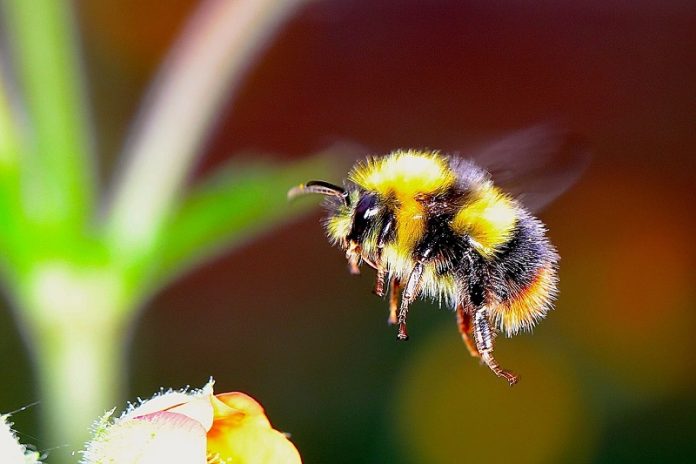 Researchers have discovered a gene that drives color differences within a species of bumble bees.

This discovery helps to explain the highly diverse color patterns among bumble bee species as well as how mimicry — individuals in an area adopting similar color patterns — evolves.

A study describing the gene, which occurs in a highly conserved region of the genome that provides blueprints for segmentation, was published in the journal Proceedings of the National Academy of Sciences.

“There is exceptional diversity in coloration of bumble bees,” said Heather Hines, assistant professor of biology and of entomology at Penn State and principal investigator of the study.

“Of the roughly 250 species of bumble bees, there are over 400 different color patterns that basically mix and match the same few colors over the different segments of a bee’s body.”

The most common bumble bee color patterns feature red around a bee’s tail, thought to advertise its dangerous sting.

In spite of the great diversity available, color patterns tend to converge toward similarity within a particular geographic region because they serve as an important and effective warning signal.

This is an example of Müllerian mimicry, where similar, often vibrant, color patterns are used among multiple species to warn predators of a dangerous feature like toxicity or sharp spines.

“Müllerian mimicry has served as an example of evolution since the days of Darwin,” said Hines.

“Studying these mimicry systems — similar color patterns in many different species — allows us to see how natural traits evolve.

It can also tell us about how traits are encoded in the genome: is there only one way to make a trait, or do different species arrive at similar traits through different genetic pathways?”

The research team investigated the genetic basis of color in the species Bombus melanopygus, which exhibits two regional color patterns.

Bumble bees that live in the Pacific coastal region are black in the mid-abdomen, whereas those in the Rocky Mountain region are red. Previous studies suggested that a single gene was driving this color change, although the identity of this gene was unknown.

They identified a regulatory region that changes expression in a gene called “Abdominal-B,” which drives the shift in color.

“Abdominal-B is located in a highly conserved region of the genome that contains important patterning genes referred to as ‘Hox genes,’ which act as blueprints for the segments of a developing bee larva,” said Hines.

“Usually any change to these Hox genes triggers many other important changes in the development of the animal’s segments, but we weren’t seeing those other changes.

It turns out that the altered expression of Abdominal-B happens so late in development that it can have very specific effects on color without other consequences.”

The change in the regulatory region resulted in Abdominal-B being expressed in an unusual location late in pupal development; the same time in development that pigment is starting to show up in the bee.

Abdominal-B is usually expressed closer to the tail of the bee, but in red-striped bees it is expressed in segments further up, causing a mid-abdominal color shift.

“It’s possible that the expression of this gene and other Hox genes might move around late in development, allowing the mixing and matching within segments to create the modular color patterning that we see across bumble bees,” said Hines.

According to the researchers, this particular genetic change in the regulatory region was not responsible for color shifts in ten closely related species of bumble bees with similar red and black color variation.

It is likely that these other species undergo genetic changes that target other regulatory regions of the same gene or different genes entirely. The researchers are continuing to investigate the genetics of color shifts across species.

“This tells us that the basis for color patterning in Bombus melanopygus arose independently from patterning in other species,” said Hines.

“Bumble bees do not share this similarity in color pattern because they all inherited it from a common ancestor, so there must be many diverse routes to mimicry.”