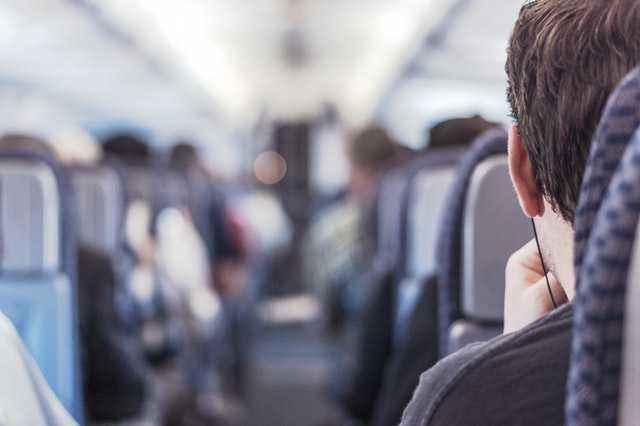 In a recent study, researchers found the bacteria accompanying airline passengers at 30,000 feet have a lot in common with the bacteria surrounding people in their homes and offices.

In this study, the researchers used advanced technology to examine the bacteria found on three parts of an airliner cabin that are commonly touched by passengers: tray tables, seat belt buckles, and the handles of lavatory doors.

They swabbed those items before and after ten transcontinental flights and also sampled air in the rear of the cabin during flight.

What they found was surprisingly unexciting.

They suggest passengers should recognize that microbes are everywhere and that an airplane is no better and no worse than an office building, a subway car, home, or a classroom.

These environments all have microbiomes that look like places occupied by people.

Given the unusual nature of an aircraft cabin, the researchers hadn’t known what to expect from their microbiome study.

On transcontinental flights, passengers spend four or five hours in close proximity breathing a very dry mix of outdoor air and recycled cabin air that passes through special filters, similar to those found in operating rooms.

So it surprised the team that what they found was very similar to what other researchers have found in homes and offices.

The sampling found significant variations from flight to flight, which is consistent with the differences other researchers have found among the cars of passenger trains.

Each aircraft seemed to have its own microbiome, but the researchers did not detect statistically significant differences between preflight and post-flight conditions on the flights they studied.

Though the study revealed bacteria common to other parts of the built environment, the team still suggests travelers exercise reasonable caution.

It’s a good practice to wash or sanitize your hands, avoid touching your face and get a flu shot every year.

This new information on the aircraft microbiome provides a baseline for further study and could lead to improved techniques for maintaining healthy aircraft.

The study does have important implications for industrial cleaning and sterilization standards for airplanes.

Among next steps, the researchers would like to study the microbiome of airport areas, especially the departure lounges where passengers congregate before boarding.

They would also like to study long-haul international flights in which passengers spend more time together—and are more likely to move about the cabin.

The study is published in the journal Proceedings of the National Academy of Sciences.