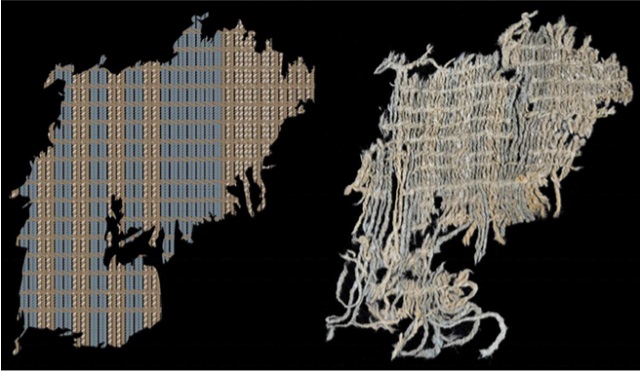 Indigo blue is one of the most valued and widespread dyes in the world. The color is popular in both ancient times and the present era. Traditionally, jeans are dyed into a blue color using natural indigo dye.

Now archeologists from the US and Europe find that the use of indigo blue on cotton can be dated back to about 6000 years ago. The study is newly published in Science Advances.

South Americans have been found to have the world’s oldest and most sophisticated weaving and dyeing traditions. In the Preceramic site of Huaca Prita on the north coast of Peru, researchers found samples of cotton textiles decorated with indigo.

The Huaca Prita was once home to farmers and fishers. People first went there about 14,500 years ago. Within a few thousand years, they had domesticated a number of plants, including beans, squash, and cotton.

Researchers used ultraviolet-visible analyses to examine the cotton samples. The methods could detect components of yellow, red, green, blue, and black dyes without damaging the samples. For indigo dyes, the selected wavelengths were 288 to 600 nm.

Out of 8 samples, 5 showed evidence of an indigo dye. Two of them were plain waves, and three were twined textiles. In one sample, researchers found 4 dye components, including indigotin, indirubin, and two indirubin-like colors.

The source of the indigo dye at Huaca Prieta was most likely Indigofera spp. Other indigo-producing plants native to the tropics of South America are grown as dye plants today.

Researchers suggest that the finding make it the earliest known use of indigo dye in the world. This is about 1500 years earlier than the previously reported use of indigo in the Old World from Fifth Dynasty Egypt (4400 years before present).