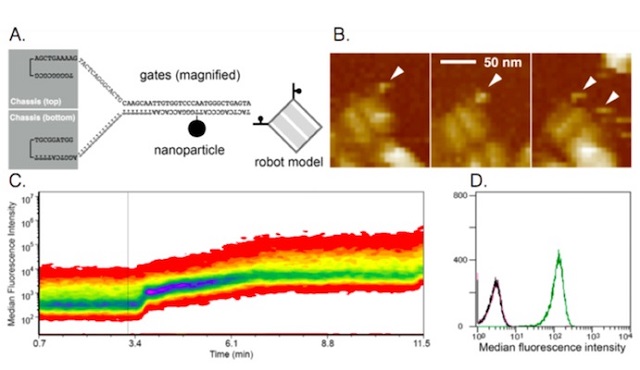 Now researchers from the Interdisciplinary Center Herzliya, Israel provide a solution. They designed a brain-computer interface (BCI), which enabled a human operator to control nanoscale robots inside a living animal.

One type of signal recording is electroencephalogram (EEG). It detects electrical activity in the brain using small electrodes attached to the scalp. Brain cells communicate via electrical impulses and are active all the time, even when people are sleeping.

BCIs allow people to move a cursor on a screen, navigate in virtual reality, and control robots with their mind. In this study, researchers go a further step: using BCI to control nanoscale robots for drug delivery.

Second, they recorded EEG from a human participant and identified brain activity patterns for robot control.

Third, the brain signals for robot control generated electric current through a coil that was injected into insects. The coil contained nanoscale DNA robots that could control drug release. Thus, the human participant could use mental activity to control the DNA robots in the insects.

Researchers found that the EEG signals activated the DNA robots and caused a cellular effect inside the insects. Furthermore, EEG signals could online switch a bioactive molecule on and off as needed.

Researchers suggest that this technology can help treat mental disorders such as schizophrenia, depression, ADHD, and autism.

In these diseases, the control of therapeutic molecules is hard. But with this technology, nanoscale robots can control drug release in patients based on the patients’ mental and cognitive states.